Originally started as a way to keep track of the names of good wines I enjoy without having a major brain fade - the Wine Hacker has evolved into a wine review and tasting site focusing on the lovely El Dorado County wineries who are now my neighbors.

Pizza Night at Via Romano in Camino, CA is FAB! 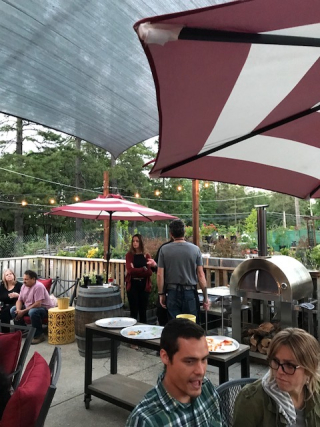 One of our favorite wineries here in El Dorado County is Via Romano, and for the first time ever, our busy schedules allowed us to attend their bi-monthly pizza night.     Jon and Leanne, the winemakers, purchased an Italian style pizza oven that cranks out unique and delightful creations about every ten minutes for the duration of the event.   What a great time we had!  The pizzas ranged from a traditional pepperoni and red sauce with cheese to a delightful pesto, tomato and arugula creation.  They even had wonderful, piping hot calzones oozing with cheese and veggies.  Nothing is better than this, fresh from the oven and enjoyed on the winery patio under the stars.

If you want to attend these events, I suggest booking early as they sell out fast.  Live music is featured every pizza night, we got to listen to Wanderlodge from Oregon, which was a folksy, southern rocky kinda small town band with a style all their own.   And you have to be quick as the pizzas get put on the table in front of the oven where hungry guests dive bomb them.  The veggie pizzas don't go quite as quickly as the meat ones do, but are every bit as delicious.

We enjoyed the new 2015 Sangiovese with our dinner and it was just lovely, with big jammy flavors and the rich complexity that Italian wines bring to the table in spades.  It perfectly complimented our delicious pizzas, and the night was just fabulous.

The only down side was that I did a great VLOG of this event that I lost as I was just learning my video blogging platform.....which was upsetting.   Next time... 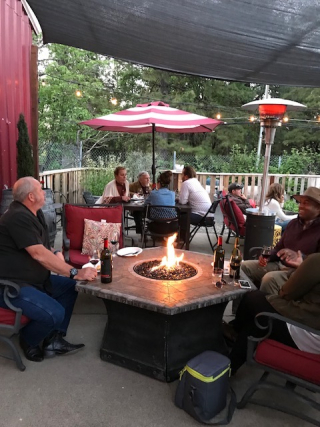 Last weekend we stopped at Chateau Davell's brand new tasting room on our way to a jam sess in the Bay Area to pick up a friend's wine club shipment.  WOW!!  The view is spectacular, the grounds peaceful and inviting, and the wines are as good as ever.

I am posting my first ever VLOG or video blog on our visit - which is here: 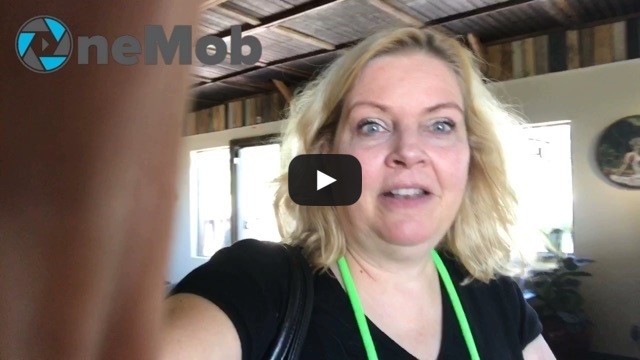 Two of our favorites were the 2015 Charlotte's Cuvee and the 2015 Verlyn.  The winemaker, Erik, names his wines after members of his family and includes beautiful portraits of them on every bottle.   Charlotte is his daughter, and she was happily doing cartwheels on the front lawn while we sipped her namesake wine.   Verlyn is Erik's grandfather.

We are definitely blend people, and both these wines are blends.  The Charlotte is an Estate wine and a blend of Cabernet, Cabernet Franc and Merlot.  Our friend John Worley served it at our jam sess where it was definitely a hit.   It has an inky deep reddish garnet color with a blonde coffee noise, big fruity middle tones, and a cardamom and clove finish.  It is both delicate and rich at the same time, and the blend has created just the right amount of lightness and complexity.

The Verlyn is a stronger, heavier wine, with 45% Mourvedre and 25% Grenache.   It has solid, structured tannins and would cellar well.  I tasted cedar, toasted oak, rich black cherry and pomegranate flavors.   This wine would stand up well to any grilled meat or BBQ, and has plenty of spunk and character.

The longest finish wine is the 2015 Green Man cabernet - a great wine to drink on Summer Solstice.  I got eucalyptus, wood, and leather on the finish, with a ripe garden nose and early palate and blackberries with sun dried tomatoes on the mid palate.  Chewy tannins give this wine the structure one expects from a fine Cabernet.

If you are up this way, a visit to Chateau Davell will be worth your while for sure! A truly good Cab Franc is very tough to find.  Not many wineries offer it, and many are harsh or just plain blah.    But when you get a truly good one, it is worth the wait.

Tom Findleton has created such a gem and I was thrilled to be able to taste it back in February. Since then, we have enjoyed several wonderful bottles of this "nectar of the Gods"

Cab Franc is primarily grown as a blending wine, which is why you rarely see it sold pure.  From Wikipedia,:

Cabernet Franc is one of the major black grape varieties worldwide. It is principally grown for blending with Cabernet Sauvignon and Merlot in the Bordeaux style, but can also be vinified alone, as in the Loire's Chinon. In addition to being used in blends and produced as a varietal in Canada and the United States, it is sometimes made into ice wine in those regions.

Cabernet Franc is lighter than Cabernet Sauvignon,[1] making a bright pale red wine[2] that contributes finesse and lends a peppery perfume to blends with more robust grapes. Depending on the growing region and style of wine, additional aromas can include tobacco, raspberry, bell pepper, cassis, and violets.

This lovely and fully drinkable wine is acidic in character, with the beautiful softness of a Cab Franc as well as a bold character usually seen more in its close relative; Cabernet Sauvignon.   I tasted rich forward fruit, a hint of black pepper, soft vanilla and hot cocoa flavors enriched with some tart strawberry and rhubarb middle tones and a soothing rich dark berry finish that was both lingering and satisfying.   I also got just a hint of the type of bell pepper you would find in a Chicago Portillo Italian sub sandwich (thinking of those, as I am making a clone of them tonight for dinner).   The color is also dark and rich, with outstanding clarity (no need to decant as no sediment in this wine).

There are enough tannins to provide some character with a mild chewy feel, as well as to ensure it will cellar well.

We enjoyed this wine with a a pasts smothered with rich Marinara sauce and meatballs.   I would expect it to go equally well with salmon dishes, fajitas, grilled chicken based dinner salads, and  Italian antipasto plates.   And yes, Portillo type Chicago-style Italian sub sandwiches which are NOT low calorie, but a true foodie experience that is not to be missed.